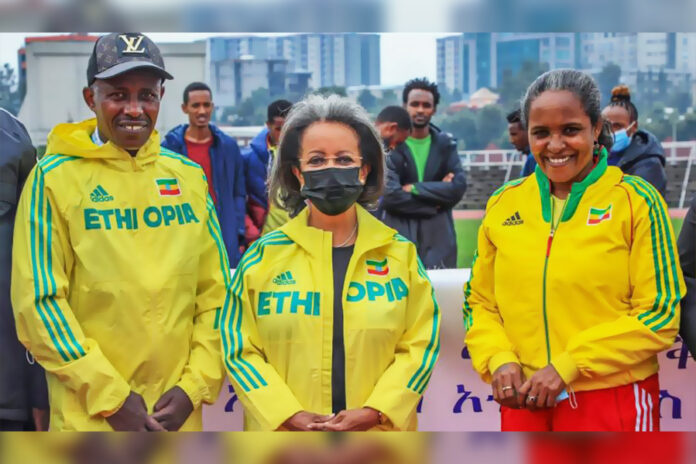 President Sahle-Work Zewde have encouraged the national team for Tokyo Olympic to aspire big success in all games ahead.
The patron of the Ethiopian Olympic team, President Sahle-Work Zewde has urged the athletes to raise the flag of their country at the global sports arena through coordinated endeavors.
Saying that Tokyo is a city where the legendary Ethiopian athlete Abebe Bikila registered a victory, she encouraged the team to maintain such a spirit of triumph and repeat a history.
Originally scheduled to take place from 24 July to 9 August 2020, the event was postponed in March 2020 as a result of the COVID-19 pandemic, and will not allow international spectators. Despite being rescheduled for 2021, to be held from 23 July to 8 August 2021, the event retains the Tokyo 2020 name for marketing and branding purposes. This is the first time that the Olympic Games have been postponed and rescheduled, rather than cancelled. The Summer Paralympics will be held between 24 August and 5 September 2021 after the Olympics.
The Tokyo 2020 Games will see the introduction of new competitions including 3×3 basketball, freestyle BMX, and madison cycling, as well as further mixed events. Under new International Olympic Committee policies, which allow the host organizing committee to add new sports to the Olympic program to augment the permanent core events, these Games will see karate, sport climbing, surfing, and skateboarding make their Olympic debuts, as well as the return of baseball and softball for the first time since 2008.