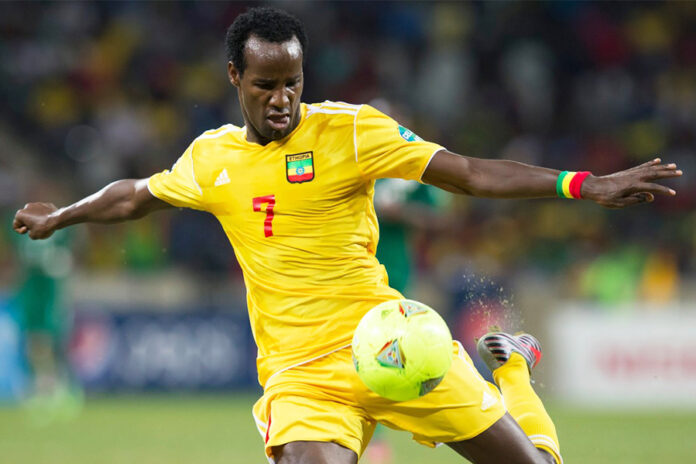 Former national team Coach Ashenafi Bekele must have learned a lesson from his past experiences at Adama Ketema and Hadiya-Hossana for he called a number of veteran players for his new club Jimma AbaJifar.
The big news about Ashenafi’s move is that a number of senior players including international Salhadi Said followed him to former premier league champions AbaJifar. Back to the top tier after a windfall second life line, AbaJifar splashed huge money to rebuild the club that represents the world famous Coffee growing Jimma town.
In his trademark move that is bringing in a number of veteran players with vast experience at the top tier, Aschenafi called former Electric, Ethiopia Bunna, and Sebeta Ketema evergreen midfielder Mesoud Mohamed for his second stint at AbaJifar. A second captain at Sebeta Ketema and member of Ethiopian national side under Wubetu Abate, Mesoud is expected to play an anchorman role at the midfield.
Mesud’s team mate at Ethiopia Bunna and Sebeta, the other veteran play-maker Dawit Estifanos was the second senior player to put his signature to AbaJifar. Though a bit flatfooted due to long service, Dawit’s long ball and deadly free kick are his famous trademarks. “Ashenafi knows how to motivate his players,” dawit told reporters after signing his contract.
Signing one of recent Ethiopian football renowned striker Salhadin Said is what makes Ashenafi special among senior players. He somehow convinced Salhadin to leave Kidus Giorgis and join his struggling side. Having Dawit and Mesoud in the midfield Salhadin could be back to his old form producing goals every weekend.
“Considering what Ashenafi did at Hossana last season,I believe Jimma AbaJifar is in good hands no more to worry about relegation,” an official from the club suggested.