The much anticipated and most talked about Ethiopian Football Federation General National Assembly kicks-off this Friday in Afar Region’s Semera Town.
Two front runners, incumbent EFF President Juneidin Basha and Olympic Committee President Dr. Ashebir W/Giorgis appear to be in a neck to neck race to be the Federation’s next President.
Five candidates are running including Amhara region candidate Teka Asfaw, Essayas Jirra of Oromia and Dagem Molashe of Gambela. But the litmus paper indicates that the cut throat race is between the two heavy weights: the former EFF President and the Southern region candidate Dr. Asheber and current Boss Juneidin from Diredawa.
Though Dr. Asheber’s previous four years was full of turmoil which culminated in Fifa’s suspension of Ethiopia for two years, his supporters claim that he initiated many positive programs, while he was with the Ethiopian Basket Ball Federation and worked hard as Olympic Committee President. “He has lots of experience at the international stage and is a proven businessman willing to give back for his country,” a former football federation employee suggested. His only shortcoming is that he is not a team player but with good people around he could lead the federation to better heights,” he added.
The incumbent president Juneidin is adamant that he needs a second term to finish his many plans. Of course his supporters claim he has a very genuine personality who wants to bring real change to Ethiopian Football.
However, his detractors argue his four year tenure was full of controversies and the worst time for Ethiopian football. “He is a good gentleman with dreams but those around him were obstacles who manipulated his honesty. He is a team player and needs a second chance with a new cabinet,” someone who claimed to know him since his time at Harar Brewery remarked.
Once of the strong candidates Teka Asfaw has not been seen in public lately and some suggest he may have lost interest.
“I don’t think he lost his appetite rather he is campaigning quietly to take everyone by surprise,” an old friend suggested.
Just five days before the election the campaign is not as vociferous as it used to be months before but it probably will be on Friday. 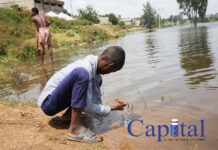