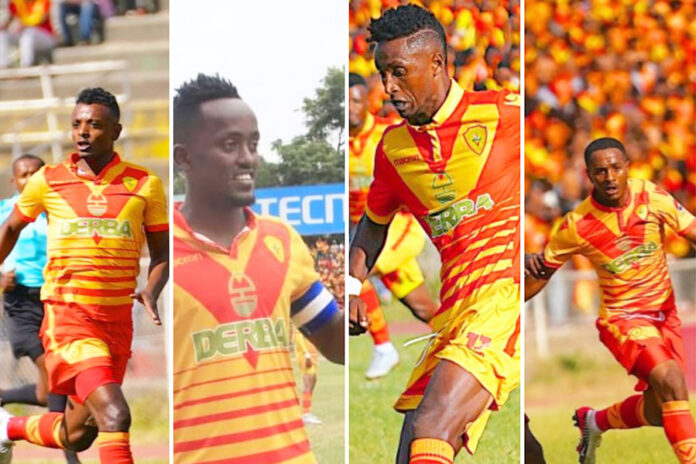 Though it is not known that both teams have an established policies and procedures related to players’ disciplinary actions, record champions St George and popular side Ethiopia Bunna handed a serious suspension to their senior players despite the season coming to end in two weeks’ time. To the amazement of football fans each side suspended four senior players having huge influence in the outcome.
Four frustrating seasons in a row without a trophy St George club officials appeared to reach their limits on Monday handing a suspension notice to the club’s heavyweights. National team skipper and twice Ethiopian Premier League player of the year Getaneh Kebede, national team central defender and second skipper Aschalew Tamene, upcoming striker Gadissa Mebrate and die-hard midfielder Mulualem Mesfin are the players subjected for suspension until the end of the season.
Though the statement from the club states that these players are accused of a number of disciplinary actions including the accusation of a sportive behavior while the team was in Baherdar, many suggest that the move is more of shifting away the blame from the club’s administration and Board of Directors. “The move is simply to lure away supporters against the players rather than the Board. Thus soon the ban will be lifted” a source close to the club suggested. “The action taken after the title race ended therefore it means nothing except for the club officials” he added.
Bunna’s much talked about playmaker who signed contract extension recently Tafesse Solomon, striker Mikias Mekonen, midfielders Addis Fisha and Haile G/Tensay are the players who got the suspension. Why the suspension turned out this time is what takes many by surprise. Although the statement states that committee members including the Physio Yishak were involved in taking the motion, many are not convinced about the move. “The players are sacrificed for the team’s failure to win the title” one football fan remarked.