Saint George’s English Coach Stewart Hall and Mekelakeya’s boss Seyoum Kebede tops the list of favorites to get sacked before the end of the current season. Saint George lost back to back title for the first time in the league’s twenty plus years while The Army side is in a free fall to bottom of the table.
With four defeats in the past six consecutive matches and after collecting only four points out of a possible 18, the gap is getting wider. Saint George is currently fourth in the table 12 points behind the league leaders. Considering the record champions’ current performance and lack of squad depth, rebounding to serious title contention appears a slippery high hill for Saint George, who boasts a record 14 titles in the past twenty one seasons.

With such an unimpressive record and Saint George’s culture of not tolerating such poor results, Stewart Hall seems destined to get the boot from behind even before the end of the season. Neither entertaining football nor results has led fans to ask how Stewart managed to get the job. Club supporters are very disappointed by the team’s poor result.
Mekelakeya’s Seyoum Kebede is unlikely to survive from the hatchet that is coming down following poor results. Six matches without a win, Mekelakeya is currently 13th in the table just a single point above the relegation zone. There are rumors that Seyoum is not on good terms with some of his senior players. This makes things complicated and he is unlikely to survive to the end of the season. Seyoum previously claimed his knock-out Cup wining team was capable of mounting a serious title contention. 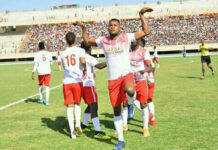 Experts from the Global South urge developing countries to lead on...

Fasil first to grace Eritrea in a Friendly match