The five time Ethiopian Premier League top scorer Tafesse Tesfaye returned to Ethio-Electric for his second spell while one of the league’s most expensive players Dawit Estifanos left Fasil along with two other players.
He returned after ten seasons including winning top scorer with Adama in 2015 after he scored 15 goals. He is known more for his physical play than his technical ability and came through the ranks to play for Ethio-Electric in 2001 before stints with Ethiopia Bunna, Hawassa and Adama and the national team. Now, at 34 he is past his prime but Ashenafi Bekele gave the striker a life line at Electric handing him a one year contract. Signing Binyam Assefa at the start of the season and now Tafesse Tesfaye the relegation threatened Ethio-Electric appear to be a fertile grazing land for veteran players.
In other news Dawit Estifanos, who makes 200,000 a month, Uganda international striker Robert Sentengo and defender Abel Wedu parted ways with Fasil.
The three players who pocketed millions at the start of the season are on their way out of the club without any explanation. Fasil is financed by the tax payers’ money so the arrangement should be known. 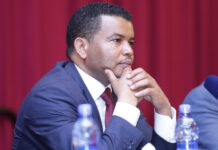