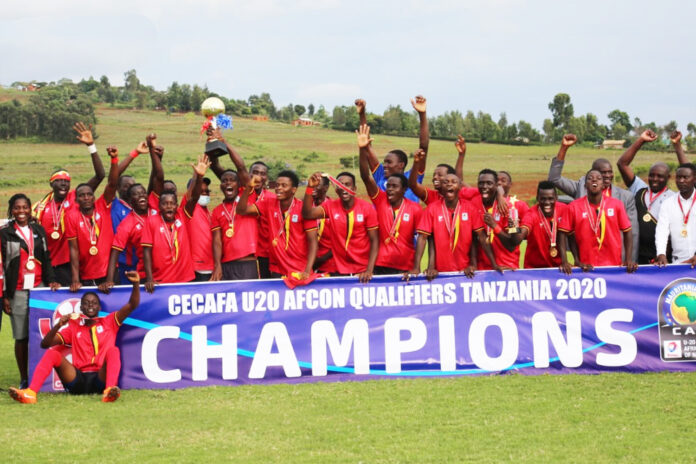 The .Uganda U20 national team has emerged as the winners for the 2020 Cecafa Championship after beating Tanzania 4-1 at the Black Rhino Academy in Arusha on Wednesday.
The Hippos got the goals from Richard Basangwa, Steven Sserwada, Ivan Bogere and Kenneth Semakule while the immediate former champions scored their only goal via Abdul Suleiman.
Uganda looked a dominant side all through the game and got the opener in the 12th minute from Basangwa’s strike. The Ngorongoro Heroes fought back and equalized at the half-hour mark from Suleiman’s effort before Sserwada scored the second for Uganda in the 44th minute.
The Hippos came from the half-time break more determined to bag the title and deservedly added the third goal in the 61st minute through Bogere. Semakule scored the final goal in the 72nd minute to seal Uganda’s victory against the hosts.
Both Uganda and Tanzania sailed to the final lap without losing a match, setting the stage for what was expected to be an epic final game in Arusha.
Meanwhile, Kenya were defeated in the third-place playoffs by South Sudan when they went down 2-1 at the same venue.
It was the second loss the Rising Stars registered in the tournament after Uganda had beaten them 3-1 in the first semi-final.
South Sudan went ahead in the second minute courtesy of Phillip Biajo’s goal but Stanley Okumbi’s side fought and equalized in the 10th minute when Nicholas Ochieng found the back of the net.
Nelson Elia scored five minutes prior to the half-time break to give South Sudan the lead yet again and Rising Stars’ concerted efforts in the second half were not able to help them level matters.
The result posted by Kenya was not well-received by the former Gor Mahia national treasurer Sally Bollo.

The reign of Abiy