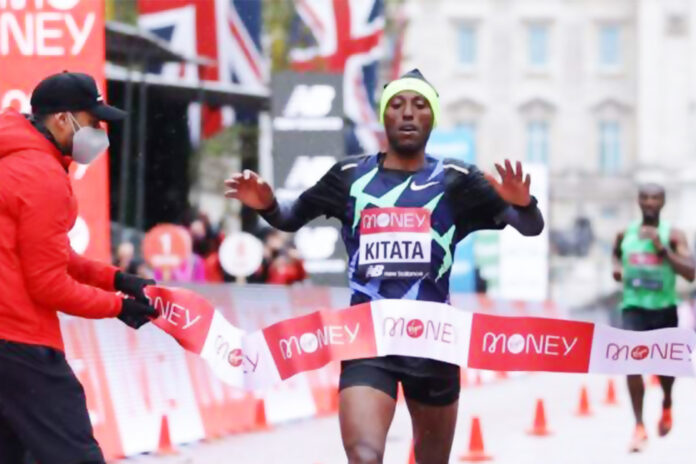 Unbeaten for seven years, Eluid Kepchoge cracked at the end of the race and finished only 8th, with victory going to Ethiopia’s Shura Kitata after a thrilling spirit. Kitata won in 2 h 05 min 41 sec ahead of Kenya’s Vincent Kipchumba.
Regardless of the conditions and the opposition, Eliud Kipchoge had made a habit of continuing to write his legend. But for the first time in his marathon career, the Kenyan suffered a setback and was unable to overcome it. His only defeat came in Berlin in 2013, where he finished 2nd behind his compatriot Wilson Kipsang Kiprotich who set a new world record.
The best marathon runner in history (Olympic gold, world record in 2h01:39 in 2018 in Berlin, the two-hour barrier broken on an unofficial race in October 2019) may have felt the weight of the years as he celebrates his 36th birthday in November.
Nothing went as planned for the 40th London Marathon. Already, the race was disrupted by the pandemic of new coronavirus: postponed from April to October, it was run behind closed doors on an alternative course, a 2.15 km loop around St James Park, in front of Buckingham Palace.
Afterwards, everyone was expecting a legendary duel between the two best performers in history, Eliud Kipchoge and Kenenisa Bekele, but the Ethiopian withdrew on Friday (left calf injury) and the Kenyan cracked.
First for Kitata
“I’m very disappointed, I wanted to do better but my right ear became blocked and I felt a cramp and a problem with one hip in the last 15 kilometers,” Kipchoge told the BBC. I don’t blame the conditions”.
In a race that was run largely in the rain, with temperatures around 10 degrees, the best runners stayed together for a long time at a pace far from the world record. Then at the 38th kilometer came the surprise: with Shura Kitata accelerating, Eliud Kipchoge let go.
With the finish line just meters away, Shura Kitata broke away to dominate a breathless sprint against Vincent Kipchumba and compatriot Sisay Lemma.
The 24-year-old Ethiopian thus won his first major victory after collecting the top spots (2nd in London and New York in 2018, 4th in London and 5th in New York in 2019).
“I prepared very well for this race, Kenenisa (Bekele) helped and advised me in training,” said the winner on the BBC.