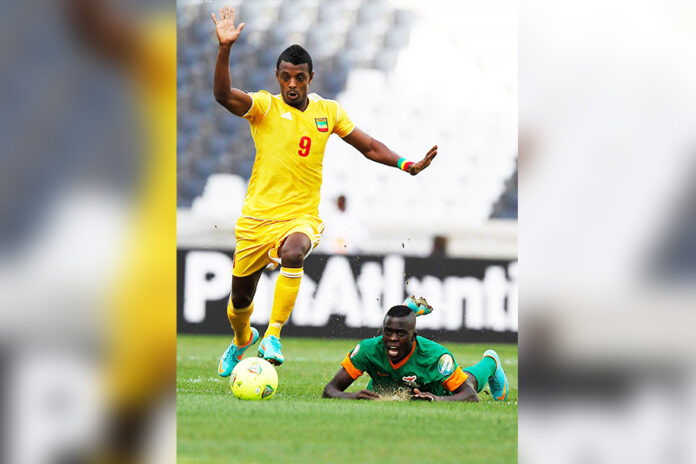 Following his contract termination in mutual agreement with record champions St George, strugglers Wolkite-Ketema reportedly handed international striker Getaneh Kebede a two year contract.
Though the South African Cup of Nations veteran striker had had a one year remaining contract, he amicably settled the case to part with St George, the only team in the country to have a foreign Coach. It was previously thought one of the three clubs: defending champions Fasil, his boyhood team Sidama Bunna and Adama Ketema were the ideal destinations. But with the club’s insistence and Coach Paulos Getachew working hard to convince him the 29 year-old joined Wolkite in a two year contract.
Ethiopian Premier League Top scorer of the Year in three occasions, twice Best Player of the season and crowned champion with Dedebit FC, Getaneh who played for South African sides Bidvest Wits and University of Pretoria for three seasons returned home to play to Dedebit where he crowned EPL Championship title then joined St George in a three years contract.
Sources close to the player suggested that he joined Wolkite for 100 Thousand Birr monthly salary plus bonuses.
Abebaw Butako is also the latest catch to Coach Paulos. Considered the recent times number one left full back and free-kick specialist, the former Ethiopian national team, Arbaminch Ketema, St George and Debub Police defender signed a one year contract.
The newly appointed Coach Paulos aka Mango has signed more than a dozen new faces before the transfer season closed on Thursday.