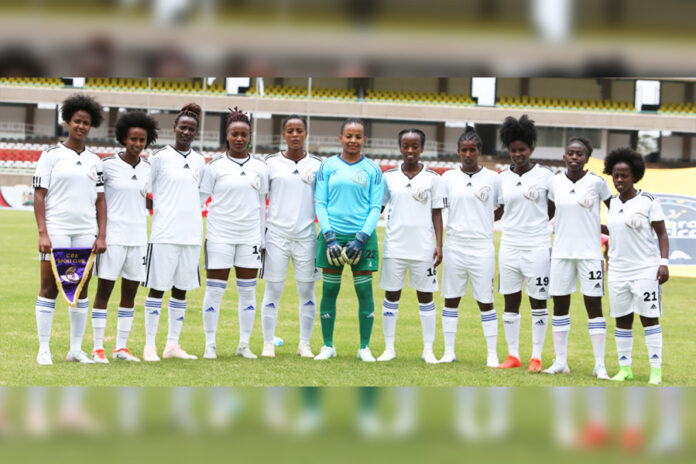 Gentrix Shikangwa showed nerves of steel, scoring a last minute penalty as Kenya’s Vihiga Queens beat Commercial Bank of Ethiopia 2-1 at the Kasarani Stadium in Nairobi on Thursday to earn a ticket to the inaugural TotalEnergies CAF Women’s Champions League set to be staged in Egypt.
The Kenyan girls laid revenge on their Ethiopian counterparts who had beaten them 4-2 when they met in the group stages and outlasted them to earn the CECAFA region ticket.
Shikangwa had opened the scoring for the Kenyan before Vivian Makokha scored into her own net to draw the game level. However, it was the Kenyan girls who wanted it more and earned the crown at the last minute.
The home side had started the final well and had a sniff at goal when Teresa Engesha danced her way past her markers, but her eventual shot was inches wide.
Vihiga however broke the deadlock minutes later when Shikangwa reacted quickest to a rebound after keeper Tarikua Bargena had spilled a shot from Violet Wanyonyi.
It was a perfect start for the four-time Kenyan champions who had successfully contained the dangerous and free scoring Ethipians. Skipper Loza Abera who has been CBE’s best player in the tournament was shut out by a well planned strategy by the Kenyans.
However, CBE drew level when Makokha brushed a header behind her own goalkeeper as she tried to defend a corner. The two sides went to the break one a-piece.
But, in the second half it was all Vihiga, and as a matter of fact, all Shikangwa in the final third. The 20-year old forward rattled the crossbar with a rasping left footer from distance before forcing the keeper to a smart save from almost the same distance.
The Harambee Starlets star forward came close again when a cross from Wanyonyi found her on the right but her well rifled volley came off the side netting.
CBE were forced to defend deep and had few chances. They however had one sniff at goal when Loza Abera flew in a cross from the right but Hiwot Dengiso headed meekly straight to the keeper.
Vihiga pushed further in the bid to find a winner and they did so in added time, Shikangwa sending a penalty to the top right corner after substitute Tarikwa Yakura had brought down the fleet footed Wanyonyi inside the box.