The 2018 UN Women First 5km run that is organized by the Great Ethiopian Run every year is set to take place on Sunday March 11, 2018. This year’s run theme is “Violence Free Life, It’s My Right”, a slogan that is chosen to show that women and girls have the right to violence free environment.
To celebrate the official launch of the race countdown, an event was held at Fitawrari H/Giorgis School on Thursday, February 8 where representatives of UN agencies, athletes, and the school children attended.
Started in 2004, the same year as the Athens Olympic, to recognize the achievements of Ethiopia’s great female athletes and to support the broader changes regarding the role of women in Ethiopia’s economic and social life, initiated a new women’s – only running event called WOMEN FIRST. More than 100,000 girls aged from 5-75 have taken part in these races since the first edition in May 2004. The women first race has grown to be the biggest women only race in Ethiopia and one of the biggest in Africa. This race that Stages to mark the international women’s day (March 8) has become a celebration of the overall contribution of women in the society and country’s development. 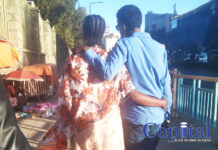 The Dream Lives On