A three points forfeit, 250,000 Birr fine, all the remaining matches to take place 500KM away from the town and a one year suspension that go along with 20,000 Birr fine on head coach Zemariam W/Giorgis, Woldya Ketema appears a side to face a huge set back to drive through the season campaign.
Though Zemariam later to be admitted to hospital for serious head injury, claimed to be the victim of the riot at the stadium, Ethiopian Football Federation discipline committee slapped him with a tough hand accusing him of provoking the players for the ugly situation created on the field.
According to some eye witnesses Woldya supporters invaded the pitch not only for the days result rather for the team’s consecutive poor performances. “Many are frustrated for Zemaraiam’s failure to deliver for the team that paid him more than one million Birr signing fee” one eyewitness remarked. “He signed big name players each with more than 1.2 million Birr but he could not make them deliver what is expected of them” the witness added.
In the meantime Zemariam in his brief stay with “Hat Trick” sport news remarked that he would never go back to Woldya after all that nasty situation. “I beg a pardon to the players including Fitsum G/Mariam to try to convince them to go back to the club after such incident months before. They did right in refusing to return rather paid hundreds of thousands Birr to have their release” Zemariam told Hat Trick News. Woldya Ketema is currently under a make shift coach and opted to play the match against Sidama Bunna at Sebeta Ketema Stadium. 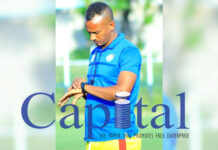