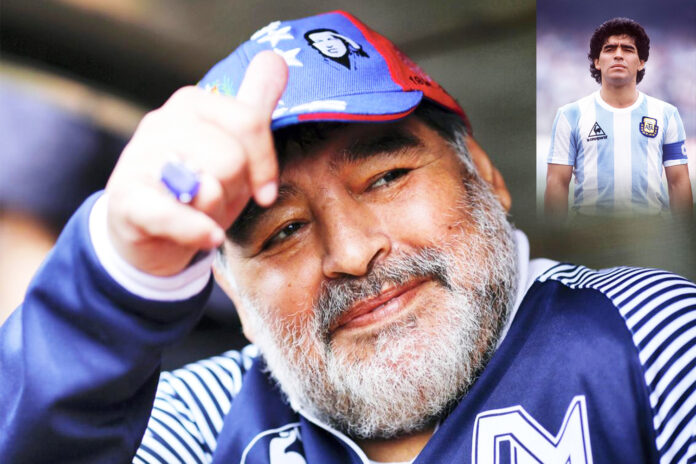 Diego 3Maradona, the Argentinian football legend, has been buried in a small, private ceremony in Buenos Aires – a stark contrast to chaotic scenes earlier in the day when tens of thousands of weeping fans gathered in the capital to pay their respects.
Only family members and close friends were permitted at Jardin Bella Vista cemetery for the final religious ceremony and burial of Maradona on Thursday evening next to the graves of his parents, Dalma and Diego.
Fans waving national flags gathered along the route to the cemetery as Maradona’s funeral car drove by under heavy security. Many tried to touch the vehicle whenever it was stopped by traffic.
Argentina had come to an almost complete standstill earlier in the day asthe nation turned its gaze to the Casa Rosada presidential palace where thousands of people queued up to file, slowly, reverently and one-by-one, past the iconic footballer’s coffin.
Maradona’s body was held in a wooden coffin draped with the blue-and-white national flag and an Argentina strip with the No 10 that had been part of his nickname “D10S” – a play on dios, the Spanish word for “god”. Fans threw flowers, football shirts and rosaries on to the coffin while, outside, health workers distributed water among the huge crowds standing under a punishing southern springtime sun as they waited their turn to enter.
Argentina’s president, Alberto Fernández, cleared his schedule after declaring three days of national mourning on Wednesday, and accompanied the Maradona family at the Casa Rosada.
“He was someone who touched the sky with his hands but never took his feet off the ground,” Fernández said following Maradona’s death, reflecting the player’s gift for captivating hearts at home and abroad.
But with the time for viewing the coffin at the presidential palace drawing short, police moved to cut off the back end of the crowd, enraging fans who hurled rocks and other objects at officers, who responded with rubber bullets.
The crowd overwhelmed organizers and the violence resulted in injuries and arrests, which led Maradona’s family to end the public visitation at 6pm on Thursday.
Another of Argentina’s favourite sons, Pope Francis, sent a special gift to the Maradona family – a blessed papal rosary that was hand-delivered to Maradona’s daughter Giannina at the intimate family wake in the early hours of Thursday morning before the presidential palace was opened to the public.
Maradona’s former wife, Claudia Villafañe and her daughters with Maradona, Dalma and Giannina were present at the small wake, as were his children from other relationships, Jana and Dieguito Maradona.