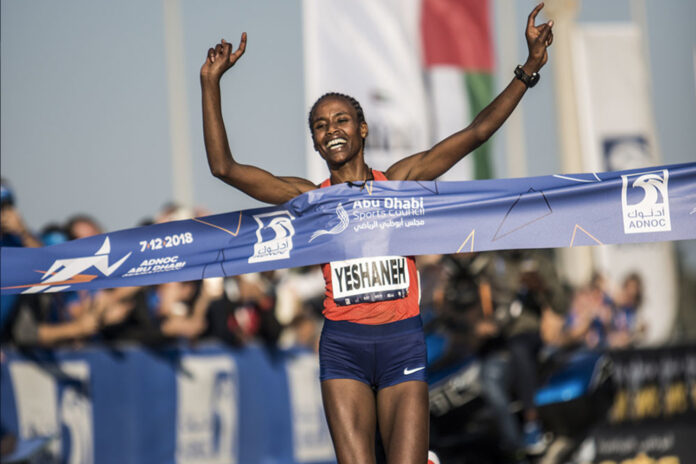 Yeshaneh smashed the world record in the women’s half marathon, clocking 1:04:31 at the Ras Al Khaimah Half Marathon, a World Athletics Gold Label road race on 21 February, clipping 20 seconds from the previous record of 1:04.51set by Joyciline Jepkosgei in Valencia in 2017.
Yeshaneh ran close to marathon world record-holder Brigid Kosgei from the outset, as the latter lead through five kilometres in 15:07 and 10 kilometres in 30:18. Yeshaneh took command shortly after the two passed 15 kilometres (45:38), eventually covering the second 10 kilometres segment in 30:54 before forging onto a commanding victory.
“I didn’t imagine this result,” said Yeshaneh, whose previous best of 1:05:46 had stood as the Ethiopian record for a five-month period between 2018 and 2019. “I am a world record holder!”
Dupliant’s sensational indoor season form continued at the Muller Indoor Grand Prix, a World Athletics Indoor Tour meeting in Glasgow on February when he stopped 6.18m to add one centimeter to the record he set one week earlier at the Orlen Copernicus Cup in Torun, Poland.
Sealing the victory at 5.94m, he continued with a first attempt clearance at 6.00m before having the bar set at 6.18m. Once again he sailed well clear on his first attempt. “It is the best little split second” he added. Everything builds up to that little split second and the freefall was magical.

The Importance of Good Nutrition