Ethiopian iconic art dates back to the 4th century, seen on monastery walls throughout the country, preserving the encounters and teachings of Yeshua the Christ and his adherents. For the Christian faith, Orthodox or otherwise, Christmas and Easter are the two primary holidays celebrated worldwide. However, the ever-indomitable Ethiopians add one more sacred day, creating a spiritual trifecta with Meskel, “finding of the true cross” by St. Helena, mother of Emperor Constantine, celebrated by Ethiopians for over 600 years. As a lover of art and culture, Meskel is much like watching a live work of spiritual art manifesting before my eyes. Energetic Orthodox youth decorate the streets with red, gold and green banners which fly majestically before the convergence of white robed, colorful clergy in Meskel Square. Ancient spiritual songs and dance are choreographed before and after the meters high bonfire burns in the presence of thousands of faithful. Eventually, adherents use the ashes to paint crosses on their faces and large communal feasts follow. Words do no justice to the grand spiritual holiday which creates a sense of colorful cohesion preserving the great Orthodox faith through reverent artistic expression.
On the other hand, in the 19th century, we find art in the West being used nefariously according to Jennifer Dasal’s book, ‘ArtCurious: Stories of the “Unexpected, Slightly Odd, and Strangely Wonderful in Art History.’ Dasal writes, “When the US government established the CIA in 1947, it included a division known as the Propaganda Assets Inventory, a branch of psychological warfare intended to boost pro-American messaging during the Cold War. The secrecy with which the CIA pursued Abstract Expressionism was not only integral to successfully fooling the Soviet Union but also to keeping any associated artists in the dark.” She further writes, “…most of [the Abstract Expressionists] were people who had very little respect for the government in particular and certainly none for the CIA. Multiple artists self-identified as anarchists…(if) you wanted to use their paintings to forward a government agenda,… the answer would most likely have been a firm no. The CIA’s answer… was something known as the long-leash policy. This solution kept CIA operatives at a remove of two or three degrees from the artists and art exhibitions…so that they could not be linked to any furtive governmental bankrolling.” Dasal states, “…they elicited the participation of arts foundations, artists groups, and, most crucially, art museums, requesting their assistance in organizing special exhibitions, events, and collections… funneled through a new arts agency created by the CIA named the Congress for Cultural Freedom (CCF)… developed in 1950 and not revealed as a CIA project until 1966.”
Finally, she asserts, “The museum most closely involved with the CCF’s plans for cultural domination was the Museum of Modern Art (MoMA) in New York City, focused through the participation of Nelson Rockefeller, a politician, philanthropist, and future vice president of the United States under Gerald Ford. The CIA/MoMA link was never “official,” exactly-and many have disputed the partnership over the years… writer Louis Menand noted in a 2005 article for the New Yorker, no formal deal between the agency and the museum needed to be made because all figures were essentially on the same page. Fighting communism, varnishing the country’s image, and celebrating art? For the cultural elite at MoMA-and others in boardrooms and lounges all over New York City-it was a no-brainer.” Woah! The full article is at https://news.artnet.com/art-world/artcurious-cia-art-excerpt-1909623
As a 20th century Pan African curator, collector and parallel advocate for social justice, I have often cautioned colleagues of the “pick and choose” injustice of the art industry creeping in, if not already entrenched in Africa. And while the injustice seen in the art industry today is about capitalism not communism, galleries are still promoting the “easy to work with non-controversial artists.” But the tide is turning in this Black Lives Matter era with growing interest in artists who unpack and confront injustice head on. I received an email introducing me to African American artist, Trenton Doyle Hancock, from Jim Cohan, owner of the prominent NYC James Cohan Gallery. Jim has visited Ethiopia, is a supporter of Zoma Museum and is well known for representing a roster of phenomenal contemporary creatives including our own Elias Sime and Nigerian Yinka Shonibare. Hancock’s work is intriguing described as “… contend(ing) with American identity and cultural expression, while confronting the ever-evolving, attendant structures of white supremacy.” He’s an artist worth introducing to Ethiopia and Africa, in general, as he expresses the subjugation under which Black people survive in America. Knowledge of antiquated racist practices shape foreign policies on the continent as well as our perspectives of each other, so yes it’s relevant. Hancock takes us on his decades long journey with alter-ego “Torpedo Boy” front and center, illuminating dark hidden areas. He holds nothing back as seen on jamescohan.artlogic.net commenting, “The more you dissect the image, the more it becomes fraught with historic tension and with my own history as a painter.” Hancock goes on to say, “The code switching painting is centered around the idea of Double Consciousness-W. E. B. Du Bois’s idea that the black man in America lives in two worlds. It’s like reaching for a star, the abstraction of the American Dream. This idea of the exchange or a dialogue is just that-it’s how to make painting move beyond its primary functions, as receptacles of symbols that are just overlaid one another, and move it into the space of where it’s overlapping with the language of graphic novels and therefore hopefully moving the form forward.” It is my hope that Ethiopia is taking copious notes in order to protect the artistic integrity and trajectory of contemporary art, ensuring the preservation of our experiences which have preserved our culture and sovereignty thus far. 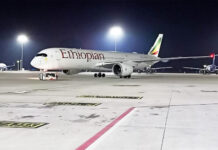