Ethio-Telecom reportedly lost an estimated 100 million Ethiopian birr worth of losses in the last six months.
The state owned company disclosed about it as it is undertaking community engagement in the capital Addis Ababa to discuss about infrastructure security.
Frehiwot Tamiru, CEO of the company expressed her concern about the ever-growing damage that occurred on telecom infrastructure by well-organized criminals to the extent of killing guards. So far eight company guards were killed by the criminals.
The company held the discussion to create awareness and reveal the magnitude of the damage for practitioners and safeguard the infrastructures that tempted the organization to deliver quality service and expand its reach.
According to the CEO, telecommunication infrastructures faced 547 damages of which 90 percent were caused by intentional act where close to about 56 percent were destroyed deliberately for personal gain in the last six consecutive months.
Luck of integration within utility providers’ takes 14 percent, traffic accidents 18 percent and natural disaster take 12 percent in the damage of telecom infrastructure. 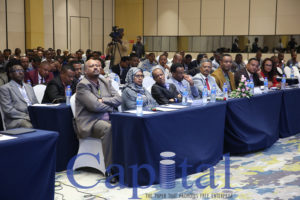 According to the chief executive, the number of infrastructure damage increased by 34 percent compared to the same period last year which triggers complaints from customers.
The act of vandalism takes place in daylight supported using the vehicles, ID and uniform of the company.
The cutting of Fiber and Copper Cable Network infrastructure caused repeated service interruption and incurring high maintenance cost to the country though infrastructures set to serve 20-30 years.
The company has 22,000km fiber cable throughout the country and got it difficult to safe guard the infrastructure though it deploys over 18,000 guards that work day and night. For this end close to 115 people were arrested and sentenced to up to nine years.
“The100 million birr theft and vandalism is equivalent amount of money needed to open additional 25 mobile service stations” she said and urges the stakeholders to collaborate with the company.
The 126 years old state monopoly, Ethio-telecom, has over 45million clients with 85.5 coverage all over the country.
Finally, she urged the general public to protect telecom infrastructure from damage adding that the company will engaged with the communities and stakeholders in creating awareness and join hands to protect.