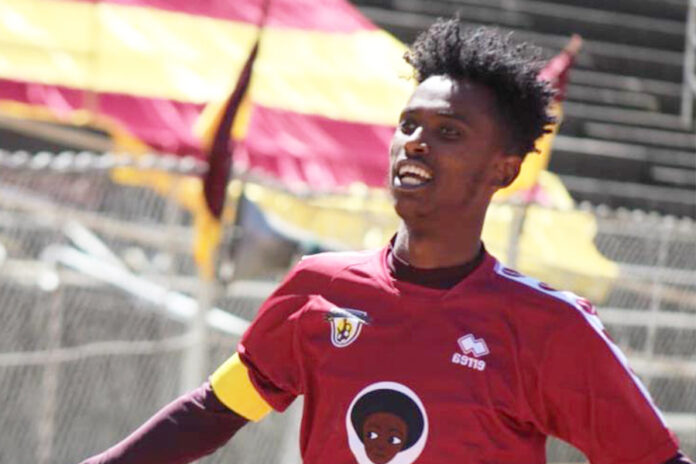 A magnificent hat trick over Sidama Bunna in Monday’s match at Hawassa ketema, Abubaker Naser broke the Top scorers’ three years record held by Ethiopian international Getaneh Kebede. Abubaker set a new record bagging a new record 27 goals in 22 fixtures.
Though the game ended in a three all and Sidama going home with a point, the day turned to belong to young Abubaker who became the recent first ever footballer to clinch four hat-tricks in a single season.
At Monday’s 3-3 draw with Sidama Bunna, the young striker took his goal tally to 27 that is bettering the 25 goal record held by Getaneh four seasons back. What is amazing about the young destroyer is that Getaneh managed 25 goals in 30 fixtures while Abubakar only in 22 matches.
Abubakar has enjoyed a rapid rise since announcing himself as Ethiopia Bunna target man with a spectacular Sheger derby 3-2 victory over arch rival St George early at the start of the season.
He grabbed his second hat-trick when “The Brown Shirts” stormed Sidama to 5-0 demolition followed by another at the 4-1 rioting over Adama Ketema and the latest on Monday in the 3-3 draw with Sidama Bunna.
Twenty seven goals in 22 matches above all first ever quadruple hat-trick in Ethiopian Premier League season, the 22 years-old possesses a showmanship style and effortlessly glides past players whilst showing an ability to influence contests tangibly scoring more than half of the total goal scored by Ethiopia Bunna.