The National Bank of Ethiopia (NBE) gave direction to the Ministry of Agriculture to come up with a detail plan for the formation of an agricultural bank.
In the latest version of ‘Addis Weg’ that focused on the agriculture sector reform strategies, Anteneh Girma, Policy Advisor of the Minister of Agriculture and Chair of Technical Committee for Agriculture Reform, said that the sector is denied adequate finance compared with other sectors.
“The sector is the major source for the economy but it is not supported when it comes to finance. It competes with other sectors like real estate or construction sector to access finance from banks,” Anteneh who presented the targeted reforms on the sector at the discussion said.
According to the Advisor, from the total loan disbursed in the country, the agriculture sector only secures less than 10 percent. He added that under the reform of the sector the formation of agricultural bank is crucial besides other ways to expand access to finance for the sector.
He indicated that besides an exclusive bank for the sector, cooperative banks should be established to support the sector.
“Banks should provide from 30 to 40 percent of the total loan for the agriculture sector,” he added.
The NBE first quarter report for the 2019/20 fiscal year indicated that 39.6 billion birr was disbursed in fresh loans, while the agriculture share was 4.1 billion birr or 10.3 percent of the total amount.
In this period domestic trade was the major beneficiary of the total new loans accounting for 8.3 billion birr or 21 percent. 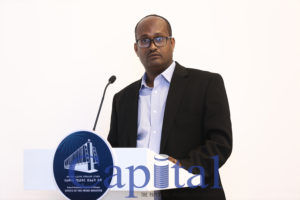 From the total outstanding credit of the banking system that was 574 billion birr in the first quarter of the budget year, the agriculture sector only took 18.7 billion birr or 3.6 percent.
Sources at the Ministry of Agriculture told Capital that the ministry is working diligently on the formation of exclusive bank for the sector.
The issue was also raised on the discussion with officials at Ministry of Finance, which support the idea and promised to work on the formation process.
Sources indicated that to some extent light papers have been developed regarding the issue but details should be done for the realization of the agriculture bank.
So far, sources said that, NBE believed that under the financial inclusion strategy, introduced about three years ago, the issue was covered and special bank would not be necessary. However the central bank indicated that it encourages undertaking detailed studies.
Even though the Home Grown Economic Reform document does not directly mention the formation of exclusive agricultural bank, it discussed about improving finance for the sector.
“The study is expected to be done by this budget year and the final decision would be known by then,” source close to the case told Capital.
The agricultural reform strategy also added an optional financing scheme like warehouse receipt and contract farming to be expanded.
The reform strategy identified that the agriculture policy should consider the supply and demand side together than focusing only on the productivity or supply side as is the past. “Productivity has been the major target for the agriculture sector in the past,” the policy advisor explained.
Anteneh said that the agriculture structural transition is very late compared with the national resource the country have.
“Ethiopia has 16 million farmers including pastoralists that are still engaged on poor productivity. From the total farmers most of them own land less than half hectare,” he added.
“The agricultural policy focuses on the supply side of the sector but it would be changed to the supply and demand side,” he explains adding “the sector should consider on the production of products under the consideration of demand.”
According to the new reform, considering the demand side means engage on import substitutions, export oriented commodities and industrial inputs besides considering to introduce new products since the consumption is changing with economic and income growth.
The strategy also added that the agriculture sector should consider the linkage of urban to rural since formation of rural towns improve the agriculture sector and encourage the educated youth settle in those towns.
The strategy also revealed that improved legal and policy framework guidelines are crucial to realize the expected changes.
For instance the policy of land management and use should be improved and independent institution is required.
Legal framework regarding land rights that include transferring, rent or give as a gift would be also included under the reform and land consolidation to entertain the use of modern technology is also the other area that needs policy frameworks.
Encourage researches and researchers like providing royalty fee at public institutes and support the private sector to play its role on the research is another part that needs reform.
Improving the market linkage and grading of products is also stated as a crucial point to modernize the sector and encourage the actors.