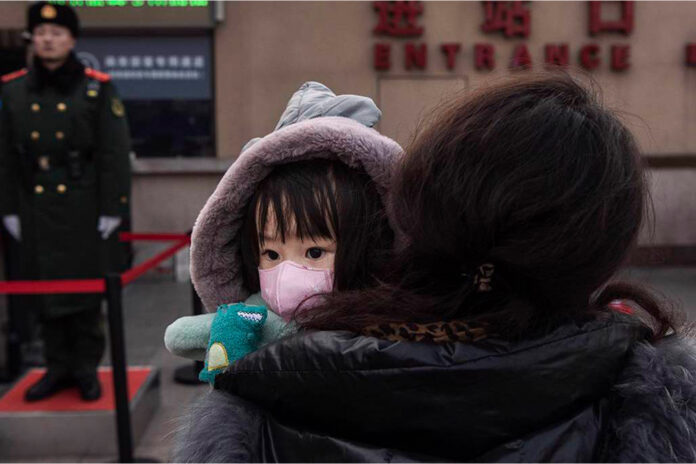 The Chinese government’s measures to tackle the coronavirus epidemic are handicapping the country’s economy and disrupting supply chains and tourism across Asia. Sharing information with the public may be more effective in containing the outbreak than draconian restrictions on freedom of movement – and less economically damaging.

Since a new type of coronavirus was reported in Wuhan, China, last December, the number of people infected worldwide has soared to over 44,000, and the death toll now exceeds 1,100. The virus is spreading across Asia – including to Japan, South Korea, Singapore, Thailand, Vietnam, and Malaysia – and also to countries in Europe and North America, although only one death has been reported outside China so far.
It remains to be seen how lethal this new virus ultimately will be. At the moment, it is certainly less severe than the 2002-03 SARS (severe acute respiratory syndrome) epidemic, caused by a different coronavirus. The new bug has killed more people, but SARS was deadlier, killing almost 10% of the 8,096 people worldwide known to have been infected.
Nonetheless, on January 23, Chinese President Xi Jinping’s government announced a lockdown of Wuhan, a city of 11 million people. Since then, the number of Chinese cities under quarantine has risen to 16, and more may follow.
The quarantines and other compulsory measures aimed at containing the disease are severely handicapping the Chinese economy, with knock-on effects elsewhere in Asia. Wuhan, for example, is the capital of Hubei Province, one of China’s industrial centers. Leading Japanese carmakers Honda and Nissan have factories there, as do several of their European rivals. Producers of car parts, electronic components, and industrial equipment also have important manufacturing facilities in the region. Many of these factories have had to halt production, because their employees have been unable to return after the Chinese New Year holiday.
These shutdowns constitute a major shock to global companies’ supply chains across Asia. Based on the value of its exports to mainland China and Hong Kong relative to GDP, Taiwan is likely to be the hardest hit, followed by Vietnam, Malaysia, and South Korea. Regional employers face a further supply shock because many Chinese working in Japan or other Asian countries will not or cannot return from China. Furthermore, the coronavirus outbreak will disrupt exports of Chinese products to Japan, in particular processed food and clothing. All these factors will cause supply shortages and thus dampen economic growth among China’s trade partners.
The coronavirus also will cause a large demand shock, not least because Chinese travelers have been a great boon to many countries’ tourism sectors. Chinese tourist numbers are now falling sharply as China bars its citizens from group tours abroad, and many countries refuse or restrict the entry of Chinese. Judging by the size of Chinese visitors’ expenditures relative to GDP, popular destinations such as Thailand, Vietnam, and Singapore will take the hardest hit. Japan will be especially concerned should the outbreak persist, because the Summer Olympic Games are scheduled to start in Tokyo on July 24.
But even if the virus is a long way from reaching its peak, China can mitigate the negative aggregate-demand shock with stimulus measures such as the one announced by the People’s Bank of China on February 2. Other governments and central banks in the region can take similar steps if necessary. Companies can substitute disrupted supply chains with alternative sources of inputs, and consumption may shift further online. Some of these changes may turn out to be permanent.
Although it is not clear how quickly an effective coronavirus vaccine can be developed, the duration of the current crisis will depend on two main factors. The first is whether and when the Chinese authorities can bring the situation under control. With the death toll still mounting, it is hard to tell, but if the government quarantines more cities, then the economic downturn will certainly steepen.
The second question is whether other countries can contain the virus’s spread. Some Japanese medical experts say that a substantial number of Japanese must already be infected, given that people arrived freely in the country from China for a month after the outbreak began. Unlike in China, however, the virus has caused no deaths in Japan so far, which raises questions about to the nature of the disease and how best to prevent and treat it. In order to determine the best public-health response as quickly as possible, China and other affected countries should share their current experiences immediately.
In fact, medical experts recommend shifting preventive resources from countries’ borders to the interior, by giving people easy access to self-inspection kits. Those who are infected should then be ordered to stay home and avoid contact with others.
As in the case of influenza, sharing information with the public may be much more effective in minimizing the spread of the coronavirus than draconian restrictions on freedom of movement, which are very costly to humans’ physical and psychological health, as well as to the economy. Other governments currently considering national responses to the new virus should bear this in mind. And the Chinese authorities should consider reviewing their approach to future outbreaks.

Akira Kawamoto, a former deputy director general in Japan’s Ministry of Economy, Trade, and Industry and a former OECD principal administrator, is a professor at Keio University.