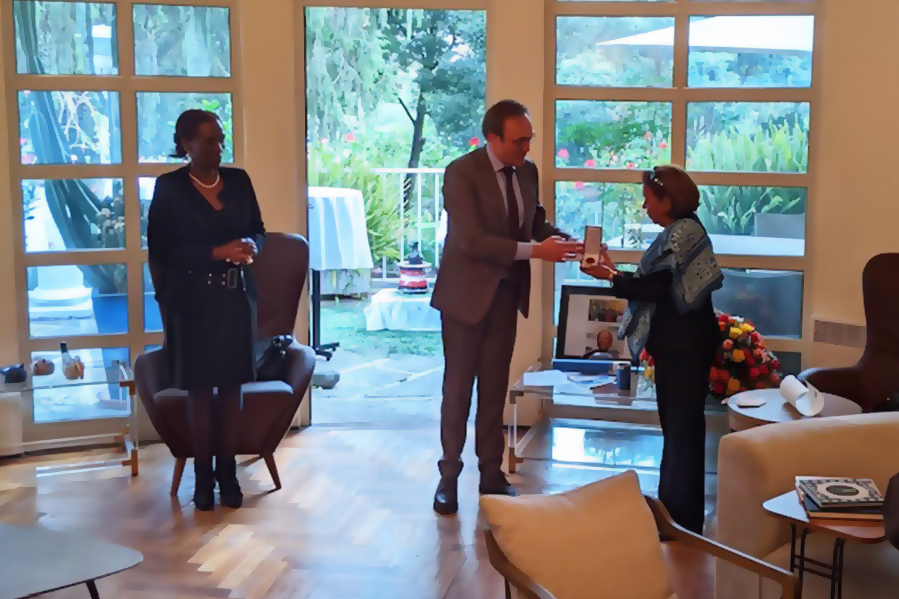 The Embassy of Belgium in Addis Ababa organized a ceremony to pay tribute to the late Professor Mitiku Belachew in presence of his wife, Fatima Chatar Belachew, members of his family and friends of the Rotary Club on Wednesday May 26.
During the ceremony Ambassador of Belgium to Ethiopia François Dumont hand over to Professor Mitiku Belachaw’s wife the Belgian distinction of “Officier de l’Ordre de la Couronne” ( Officer of the order of the Crown) , recently bestowed upon him for his exceptional merits and his exceptional career as surgeon.
The Ambassador said “this decoration is awarded to your husband to honor the exceptional merits of his professional career as a surgeon but also symbolizes the friendship between Ethiopia and Belgium.”
Professor Mitiku Belachew passed away on the 7th of April 2021. In March, he had had the opportunity to receive the diploma of the Belgian decoration and the congratulations of the Belgian Deputy Prime Minister and Minister of Foreign Affairs, Sophie Wilmès. He had welcomed with simplicity the “good news” and he was planning to receive the decoration on the occasion of his next stay in Ethiopia.
Born on the 11 of June 1942 in Wonchi, he moved to Addis at the age of 12. Experiencing the death of his brother, he studied medicine at Addis Ababa University to understand the causes of his brother’s death. Then with a scholarship, he moved to Liège University in Belgium, although he did not speak French. He graduated in 1970. He took the Belgian nationality but Ethiopia was always very deep in his heart. He worked in Liège as a surgeon and invented a laparoscopic adjustable gastric banding to help people suffering from obesity. He performed the 1rst successful surgery of the sort in 1993 using a laparoscopic camera.
The “High mountain Shepherd who became surgeon” the title of his autobiography recently translated to Amharic, was very well known in Belgium. In Belgium, he was considered in a famous radio show as one of the most prominent personalities among the “Belgians living abroad or from foreign origin”.
According to the Belgian Ambassador “What struck me when I met him last year in Addis Ababa, was his willingness to transmit a message of hope and positive ambition to the young generations, to his son Shibeshih, to his grandson Ulysses but beyond to the Ethiopian youth. Believe in your dreams. Be ambitious for you but also at the service of your own community. “Dignity for me and for all the others” was his motto.”
Professor Mitiku visited Ethiopia regularly to support various development projects in Wonchi and helping hospitals as well